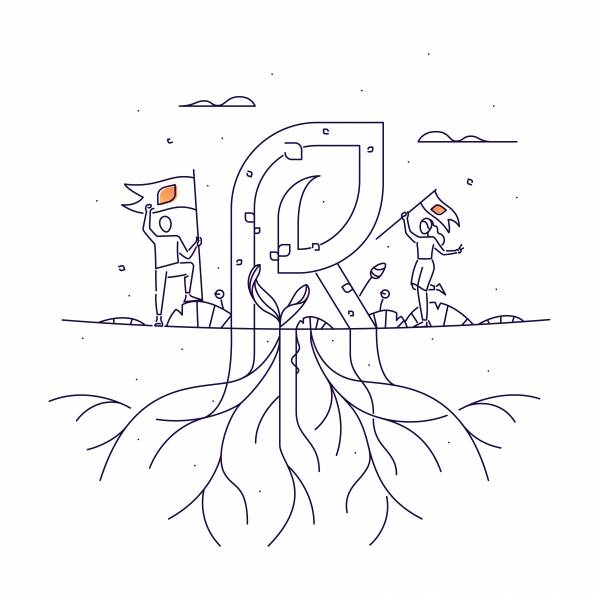 On February 28th, Radicle Science hosted our first live webinar, reporting on the Radicle ACES study results and talking about the future of research in the CBD industry. With over half the attendees coming from CBD or cannabis brands, we were excited to see the interest that validated clinical research is generating in the industry.

Co-founder and CEO Dr. Jeff Chen, MD/MBA kicked off the webinar with a brief intro as to the history of cannabis research and the challenges this industry has faced since the early 1970s in the U.S. Here’s a recap!

Cannabis has been labeled as a Schedule I drug for half a century. There was only one regulated source for DEA approved cannabis research, and that was a farm at the University of Mississippi. The problem with that? The products weren’t anything like what people were actually consuming… it was frozen dried flowers rolled into a cigarette.

Dr. Chen, the former founder and Exec Director of the UCLA Cannabis Research Initiative, said he too experienced this huge flaw in the research industry when it came to cannabis or cannabinoids, “In our case we could not study a single one of the products that 50M plus Americans were using… so it was very frustrating to say the least.”

Dr. Chen then spoke about the 2018 Farm Bill, which declassified hemp-derived CBD as a Schedule I drug. The industry saw a proliferation of CBD crops and CPG goods sold more or less as dietary supplements. The FDA stepped in and declared that CBD couldn’t be sold as a dietary supplement because a pharmaceutical company had already begun substantial clinical research on CBD and had received FDA approval for this plant-derived CBD product as a drug before it was widely sold as a supplement. This has led to a lot of confusion and has limited research in this sector. Universities wouldn’t and still won’t touch it, because they believe CBD has to be studied as a drug. They usually don’t deviate from the norm because they rely on federal research funding.

For decades, the research community has been challenged when it comes to running meaningful studies due to these regulatory hurdles and more.

Until now. Radicle Science was borne out of an innate belief that there is a better way. One of our first tasks was to conduct real-world evidence (RWE) research on CBD products already on the market. Radicle uses a real world study approach, with products that participants take in their own homes in their daily lives instead of administering products in a lab and asking participants on the spot “How do you feel right now?”

As Dr. Chen explained, “We wanted enough time to capture meaningful data, so four weeks seemed sufficient based on anecdotal evidence from consumers, who reported that the products were taking about a month to take effect.”

Dr. Chen also showed the validated instruments that the Radicle ACES study used to measure participant outcomes and why these instruments were crucial to the study, “The beauty of using these validated survey instruments is that we can now compare this to other studies… using the exact same validation measures.” In other words, because Radicle Science uses these gold standard outcome measures, brands can compare their own products to any other product or treatment studied by that same measure/RWE approach. 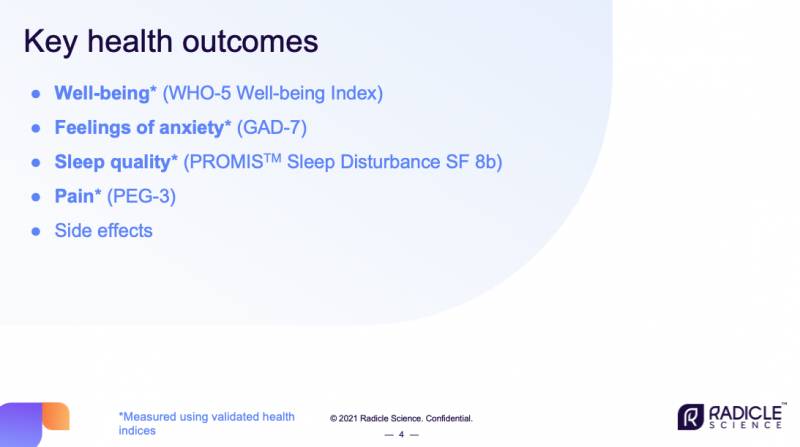 Two of the thirteen brands who participated in the Radicle ACES study attended the webinar to explain why they joined in, as well as talk about how they will use the data to share meaningful insights about their products and their customers: Gavin Chandler, CFA and CEO of Trokie® and Rosemary Mazanet, MD/PhD and CSO of Columbia Care.

As Dr. Mazanet showed in her slide, Columbia Care, like most other CBD brands, was relying on anecdotal reports from customers and reviews to glean which products were helping. But, as she said, “Actual quotes from actual customers beg for more. The sample feedback you get from your customers isn’t enough. That’s one of the reasons we were very interested in working with Radicle Science on the Radicle ACES study…We don’t just brand. We say: ‘Take X product, and when.’”

Dr. Mazanet went on to talk about how they wanted to learn about the taste, the timing of dosing and the adverse effects. The Radicle ACES results for Columbia Care provided an interesting bit of information about GERD, or acid reflux in participants, specifically: “Some of the patients reported adverse effects if they took the [product] right before they went to sleep.”

Due to the Radicle ACES study, Columbia Care was able to recommend that customers should take their product a few hours before bed instead of immediately before.

"We don’t want to just believe our own branding all the time. You need to see it.”

Gavin Chandler from Trokie® took a product-development approach to the data the Radicle ACES study reported for his brand. As a relatively new brand, they were starting at ground zero. As Chandler explained, “Almost everything was going to be new for us… we had some thoughts and some theories and some propositions about how our unique route of administration would be beneficial for patients but we really didn’t have any data to support one way or another whether or not it was going to be a real differentiation.”

Trokie® was curious about dosing and reliance on other medications. They gleaned two things from the dataset: 1. Of 90 participants, 30% of those who reported all three conditions also reported a reduction in their reliance on other medications they took to alleviate those same conditions while in the trial (Trokie® does not recommend any medication changes without consulting a healthcare provider first) and 2. The self administered dosage didn’t seem to have any correlation in terms of the BMI of participants, nor did BMI have anything to do with perception of well being.

“One of our partners said that the rule is any good clinical trial deserves three or four more. I think that’s the picture that’s being painted here. What I’m really excited about is the next step, using the Radicle Discovery platform to do randomized placebo controlled blind trials.”

The webinar closed with some inspiring comments from all three as to the future of clinical research in the health and wellness industry, kicking off with Gavin Chandler, who stated, “We are writing on a blank slate right now. There is just very little of this data available for clinicians.”

Dr. Mazanet added, “I think this is really helpful for brands to be able to perfect their product… It helps people home in on what they might want their product to look like in a perfect world and how they might want to do that before we do research… You can spend millions of dollars, tens of millions, hundreds of millions on research, but you have to ask the question ‘right’ first… I think that’s where we need to use this data, to try to help make the products the best that they can be… that’s what’s exciting to me.”

Dr. Jeff Chen closed the talk with this: “This is just the first shot across the bow. There is a lot of work that needs to be done… there’s a half century of research bans that need to be overcome. It’s amazing to be at the forefront of this and I’m excited to wake up every day and be a part of it.”

Stay tuned for more studies in early 2022! Next up: a Radicle Discovery study called Radicle Sleep! If you are a consumer interested in participating in Radicle Sleep, you can learn more here. Recruitment will begin later this month. If you are a brand interested in participating in a Radicle research study, you can schedule a strategy session at no cost to you.

Missed the webinar? That’s ok! You can still watch the entire podcast on the Radicle Science YouTube channel!